Guadi Galego is one of the most relevant artists on the current Galician scene, the result of a musical career that began when she was very young.

In 1997 she joined Berrogüetto as a vocalist, pianist and bagpiper, and recorded three albums with them. Viaxe por Urticaria (1999) and Hepta (2001) were warmly received by critics and deserving of several awards and recognitions (among them, the Best European Folk Group of 2000 and a nomination for the Latin Grammys in 2002). In 2006 they published 10.0, which won the 2nd Opinion Prize for the Best Galician Album of the year and was a candidate for the Music Awards with its song “Xente”.

At that time, Guadi was already beginning to experiment with different sounds in groups such as his most intimate and personal project, Espido (with Guillerme Fernández) or Nordestin@s (with Abe Rábade and Ugia Pedreira), both also awarded the Best Galician Album Award.

Finally, in 2009 Benzón came out, an album acclaimed by the Galician and Spanish critics with which he began his solo career, while continuing to participate in other projects.

In 2012 she joined the musicians Xabier Díaz, Guillerme Fernández and Xosé Lois Romero to form the group aCadaCanto. With them he publishes a self-titled album, and another in 2013 entitled A rosa d'Adina, in which they played verses by Rosalía de Castro. That year they received the Martín Códax da Música Prize in the category of Author's Song.

In 2014 she published his second solo album, Lúas de outubro e Agosto, and in 2016 (the year in which he won the Martín Códax da Música Prize for Best Artist in the Author's Song category), the third came out, O mundo está parado . This album travels from the personal to collective reflection on issues such as identity and coherence, developing an enveloping sound with pop nuances that reappear on the EP Bóla de cristal (2018). For these three works, he has the presence in the production of Pachi García from Jaén.

In 2015 he received the Galicia Critics Award in the Music category.

For this work, she was awarded the 2020 State Prize for the Promotion of Plurilingual Reality. This year she again won the Martín Códax da Música Award for Best Artist in the Indie/Pop category.

On November 20th 2020, his 5th solo album, Costuras, is released on the market and on the networks. As in the previous one, Guadi works on this record with Catalan producers Vic Moliner and Pau Brugada (Olivera Estudi). 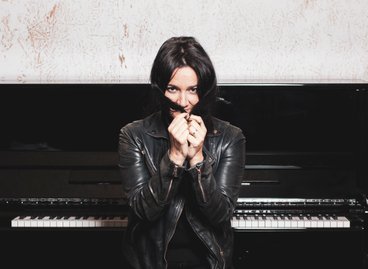